Knox City Council, based in the eastern suburbs of Melbourne, recently commissioned a feasibility study into a solar farm on the site of the now-closed Wantirna South landfill, which found that the site is suitable for a 5MW solar array system on the land. Point Advisory was subsequently engaged to undertake a preliminary feasibility study to understand the potential benefits and likely financial viability of co-locating a large-scale battery with the solar farm.

Every situation in which a large battery could be used is unique, and therefore bespoke solutions need to be developed specific to the project at hand. Some of these factors include, but are not limited to:

Many of these factors are interrelated, and therefore finding the right battery configuration for each unique circumstance can be a complex optimisation problem.

As part of this project, Point Advisory held stakeholder consultations with three key stakeholder groups to attain their initial feedback on key issues that may impact a large-scale battery project: the Department of Environment, Land, Water and Planning (DELWP), the local network provider United Energy (UE), and the Environmental Protection Authority (EPA). This process was undertaken primarily to identify any red flags associated with site-specific planning and environmental concerns, preferred placement of a large battery, and issues around connecting to the solar farm and broader electricity grid.

Point Advisory, with the help of Energy Synapse, also undertook preliminary financial analysis and modelled the potential costs and revenue streams for different battery sizes. The revenue that a battery may be able to capture in future is uncertain and difficult to estimate. A battery must be controlled in a relatively complex way to maximise the total income across multiple potential value streams. The diagram illustrates some of these potential “value-stacks” (note that it is not to scale and the size of each bar is indicative only). 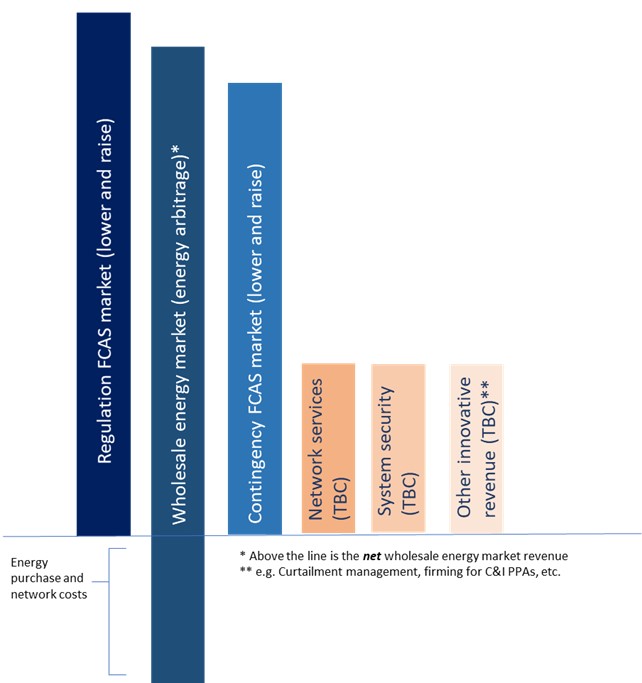 On the flipside, up-front capital costs associated with the battery and network connection tend to be the major cost components of most large battery projects, however environmental costs and ongoing operational costs can also be considerable, especially if the connection arrangement results in substantial network demand charges.

Based on Point Advisory’s preliminary investigations, the optimal battery size range and technology were determined, and a large-scale battery project co-located with the solar farm was found to likely be financially and technically feasible under most scenarios. In addition, with the rapid downward trend in battery costs, and stable or increasing potential revenue streams for a battery, the business case for a battery is expected to improve over time.

If you have any questions about large scale batteries or solar projects in general, and the services we can provide, don’t hesitate to contact Ross Tunmer or George Wang.